A short post about a very nice classifier, the 1-Grid-LSTM, and its application to the XOR problem, as proposed by Nal Kalchbrenner, Ivo Danihelka, Alex Graves in their paper.

The problem is pathological in the sense a simple bit in the input sequence can change the target to its contrary. During training, accuracy is not better than random for a while, although a kind of engagement can be observed in a wavy growth of the accuracy to 100%.

Building a network manually, or building a recurrent network with the bits as input sequence to the RNN, are easy. The latter is a simple 2-bit parity problem.

Since it is complicated to visualize a N-Grid LSTM let’s consider the case in 2D : the 2-Grid-LSTM.

The 2-Grid-LSTM is composed of 2 LSTM running on 2 different dimensions (x,y), given by the following equation :

To get a good idea of what it means, you can consider a 2-Grid-LSTM as a virtual cell traveling on a 2 dimensional grid : 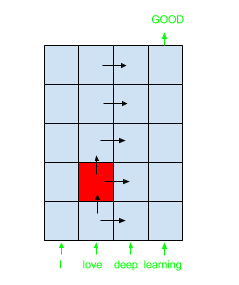 LSTM 1 uses the hidden state value of the LSTM 2, in this case \(h_2^{x,y}\), instead of its previous value. This helps the network learn faster correlation between the two LSTM. There is always a notion of priority and order in the computation of the LSTM. Parallelisation of the computations require to take this into consideration.

In the case of 1D sequences (times series, textes, …) for which 2-GRID LSTM perform better than stacked LSTM, input is given for the bottom row, as shown with the input sentence “I love deep learning” in the above figure.

In case of text classification, output will be given for the last cell top right (as shown with “Good” output label in the above figure).

The first dimension is usually the time (x), the second dimension the depth (y).

A drawing of the mecanism and the connections inside the cell would be : 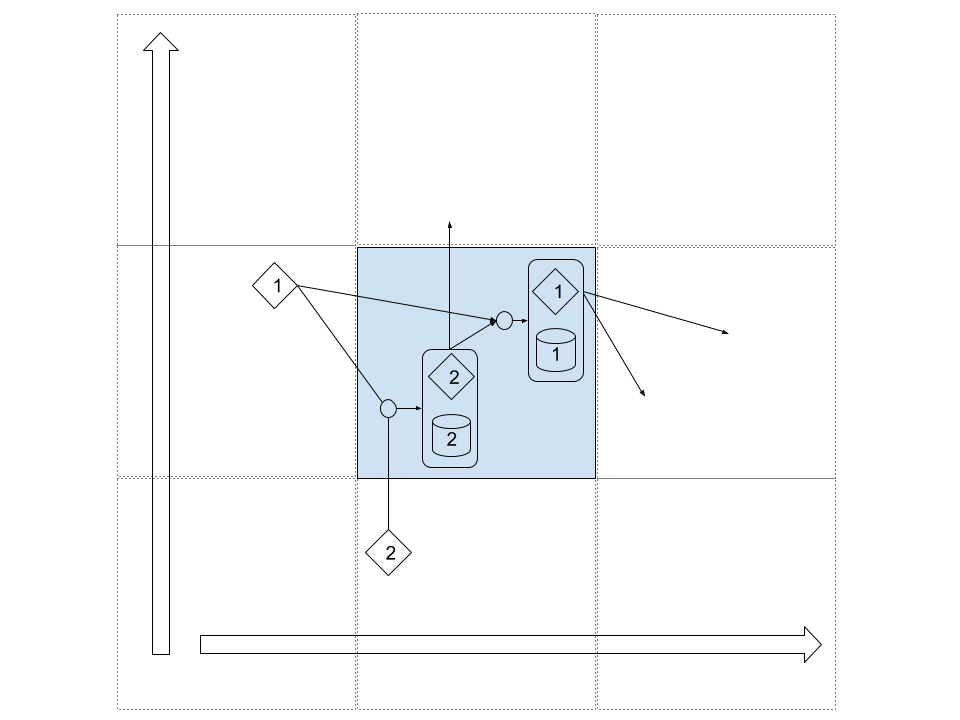 The 1-Grid LSTM is a special case since the LSTM is used along the depth dimension to create a feedforward classifier instead of a recurrent network. It looks as follow :

It looks very closely to a LSTM, but with the following differences :

The XOR problem shows the power of such network as classifiers. Here are two implementations, one in Theano, another in Torch :

1-Grid-LSTM is very close to memory networks, networks that are also recurrent along the depth dimension, but whose weights can vary depending on a memory that is being feed with statements or facts.

Recurrency along the depth sounds to me very close to natural reasoning, for which I have the feeling our brain is spinning for a certain amount of time, until it founds the solution. But that is not very scientific…

Recurrent Highway Networks also use this kind of recurrency.

The N-Grid LSTM is a improvement of the multi-dimensional LSTM.

The option to untie the weigths in the depth direction is considered also during evaluation of models. To be precise two options are possible :

In this sense, N-Grid-LSTM with the option of untying the weights and modifying the mecanism along the depth dimension, is a generalization of stacked LSTM.