OpenOffice and LibreOffice are the main open-source office suites, the opensource equivalent to Microsoft Office, to create text document, spreadsheets, presentations and drawings.

Both are equivalent, but the usual advise is to use LibreOffice (see the differences) since it is the project of the volunteers from the open-source community and has been developping more quickly.

I’ll speak about LibreOffice now, but the same is true for OpenOffice.

and in the menu bar LibreOffice > Preferences, enable macros 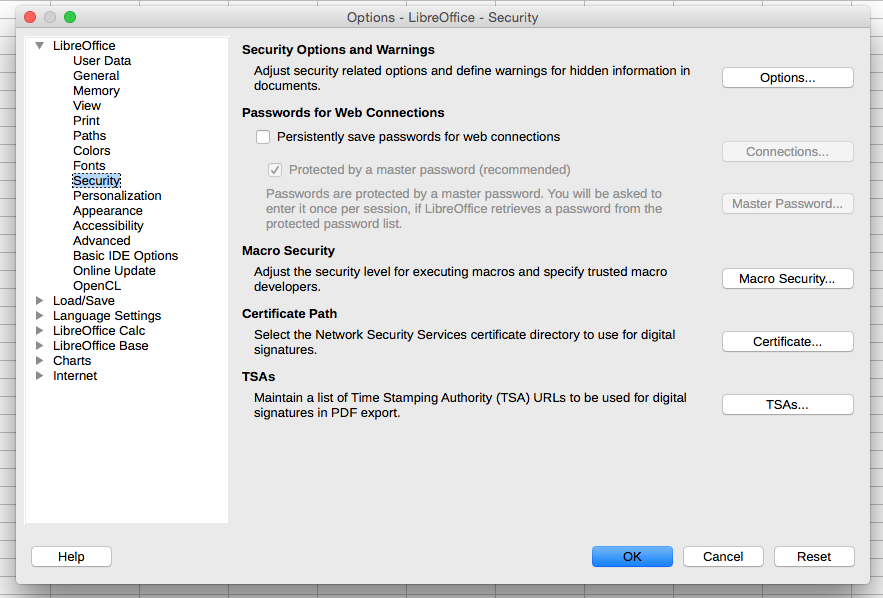 I would recommend you to set Macro security to Medium which will not block nor allow macros but alert you to choose if you trust the editor of the document : 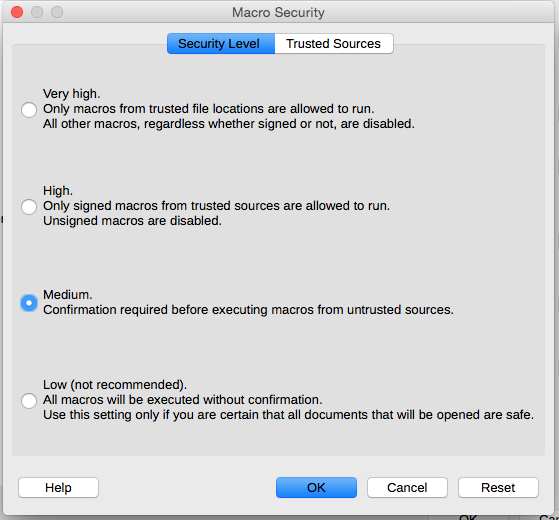 Which language choice for writing your LibreOffice macros ?

Macros are scripting for the office suite.

Many languages are accepted by the LibreOffice API, thanks to the Universal Network Objects (UNO). Among them are : Visual Basic, Java, C/C++, Javascript, Python.

For the choice of the language, I would first insist on the multi-platform requirement, which means it’s better if the macro / script can be executed on different platforms such as Windows, Mac OS or Linux, because LibreOffice is also multi-platform and documents will be shared between users from which we cannot expect a particular platform. Visual Basic is not multi-platform and would require significant changes from one plateform to another (Visual Basic, Real Basic, AppleScript…).

Java and C/C++ require compilation, are much more complex and verbose.

For a scripting need, I would advise Javascript or Python. Both are very present in script development world wide and are standards de facto. Many tools have been built for task automation on Javascript, such as Cordova (the multi-platform mobile app framework) or Grunt. Many other tools are using Python as well, such as AWS CLI for example.

I would advise to write most of your code logic outside the interface-orientated architecture, following a standard code architecture, with your common NodeJS dependencies or Python libraries.

But, Javascript could be not precise enough to work nicely in your spreadsheets (even though there exists very nice libraries for numeric computation) and could be disconcerting for your Office users due to rounding errors ( 0.1 + 0.2 does not equals 0.3 in Javascript).

On the contrary, Python has been used extensively for numeric computation, with famous libraries such as Numpy, Numexpr … which make it perfect for spreadsheet macros.

Python has also numerous available libraries for other purposes, due to its success and support from big digital companies, such as Excel reading or writing libraries which make it the perfect choice for macro development.

Even though Python 2.7 still remains very used, and Python 3 introduced differences, the latest version of LibreOffice comes with Python 3.3, so the use of Python 3.3 is advised for durability.

First play with the Python shell to get familiar

Before creating your own macro, let’s play with the Python shell and interact with a document, let’s say a spreadsheet.

First launch LibreOffice Calc (Calc for spreadsheet open documents) with an open socket to communicate with from the shell on your Mac OS :

(for the Windows command : "C:\\Program Files (x86)\LibreOffice 5\program\soffice.exe" --calc --accept="socket,host=localhost,port=2002;urp;" but if any trouble, have a look the proposed workarounds).

and launch the Python shell

Python-Uno, the library to communicate via Uno, is already in the LibreOffice Python’s path.

To initialize your context, type the following lines in your python shell :

These lines are common for every documents (Text, Spreadsheet, Presentation, Drawing).

Now you can interact with the document.

Since we launched LibreOffice with --calc option, let’s try the spreadsheet interactions :

If you open a text document and access it with a new document writer, you can try the following interactions :

Here is a schema for what we’ve just done : the shell communicates with the LibreOffice runtime to command actions inside the current document. 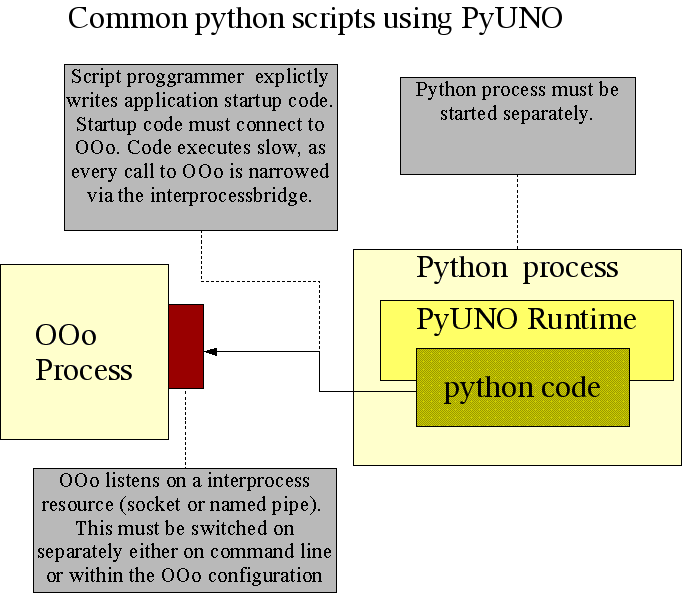 It is the other mode, the macro is called from inside the Libreoffice program : 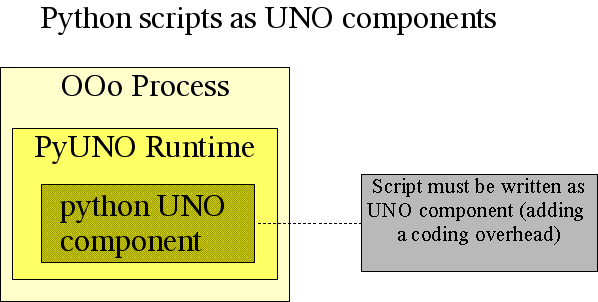 OpenOffice.org does not offer a way to edit Python scripts. You have to use your own text editor (such as Sublim, Atom…) and your own commands.

There are 3 places where you can put your code. The first way is to add it as a library for LibreOffice in one of the directories in the PYTHONPATH

But this is only useful to be used in other macros.

The 2 other ways are to insert your script

Let’s see how to install it in the LibreOffice install first, I’ll show you the document-inside install in the next section.

You can find and call your Macro scripts from the LibreOffice menu for macros Tools > Macros > Organize Macros. 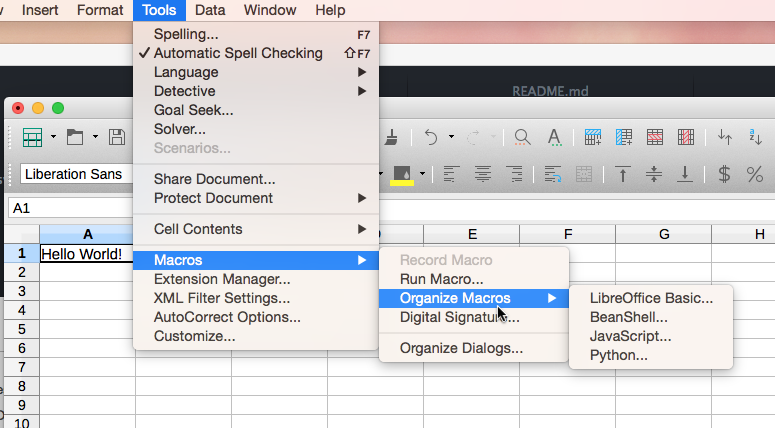 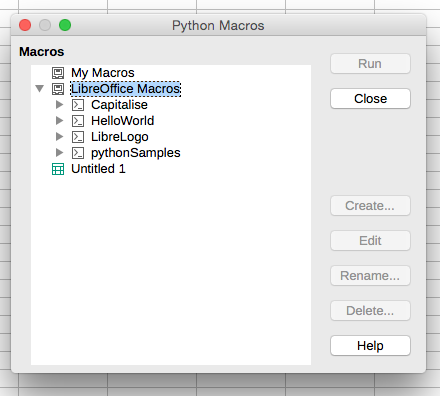 and copy it to the Macro directory for LibreOffice :

Open a new text document and run it from the menu : 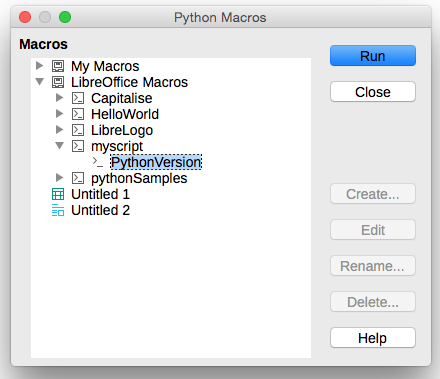 In case there are multiple methods, all of them will be exported, but we can also specify which one to export with the following statement at the end of the file :

Its spreadsheet counterpart would be :

For distribution of code, OXT format acts as containers of code that will be installed by the Extension Manager or with the command line /Applications/LibreOffice.app/Contents/MacOS/unopkg.

A tutorial under Ubuntu

Pack your script inside the document : the OpenDocument format

You can have a look at inside by creating and saving a opendocument spreadsheet document with LibreOffice and then unzipping it :

You’ll get the following list of files and subdirectories in your extracted file :

You can directly append your script to the file with the zipfile library. Let’s create include_macro.py :

such that to include your Python macro inside document.ods, just type command

you should be able to run your macro 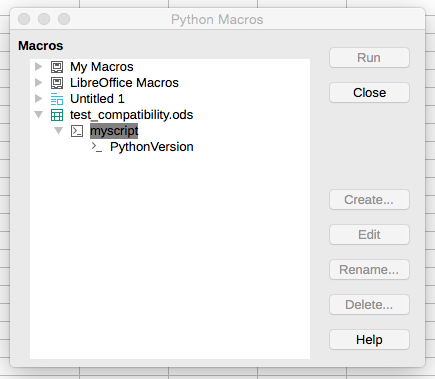 Add a button control to launch your macro 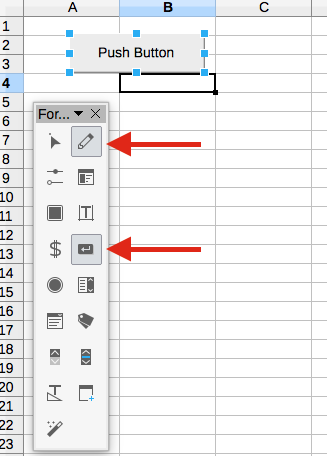 Right click on the button to open the control properties and link with your macro : 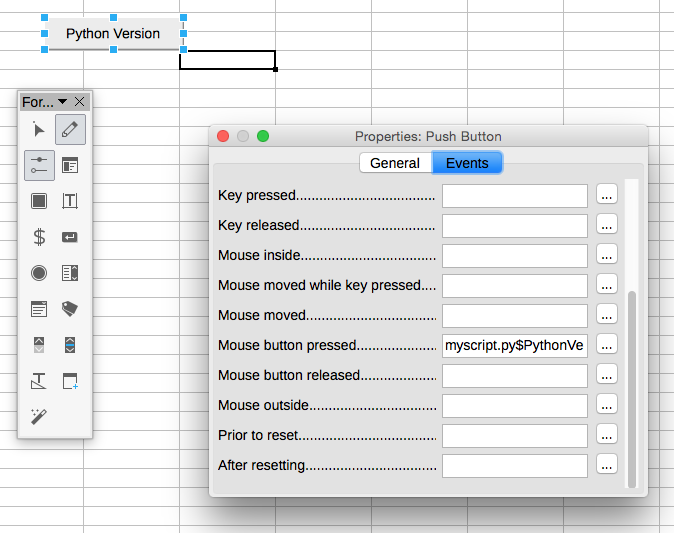 Toggle design mode to OFF, close your toolbars. Your document is ready.

You can download my example here. This document can be used to check everything works as espected on the LibreOffice version of your customer.

You can also add the button programmatically :

and add a listener

Start a macro when document starts / opens / is loaded

In the toolbar Tools > Customize, add the macro : 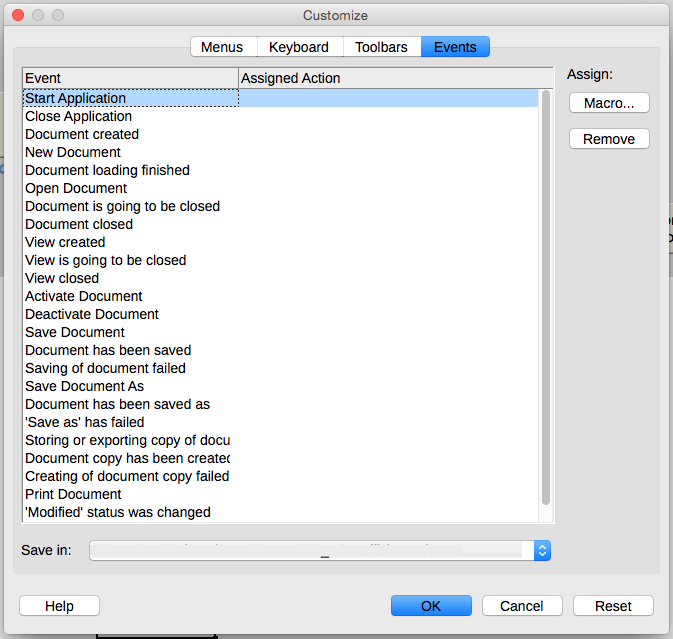 You have the choice to save the preference

You can also have a look at number formats, dates, …

Get range value as an array

Named ranges are like “alias” or shortcuts defining ranges in the document : 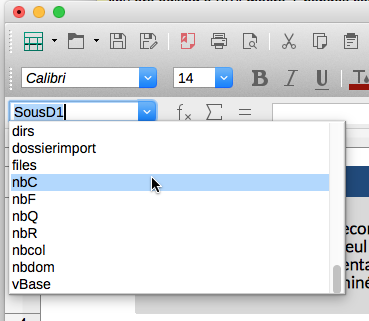 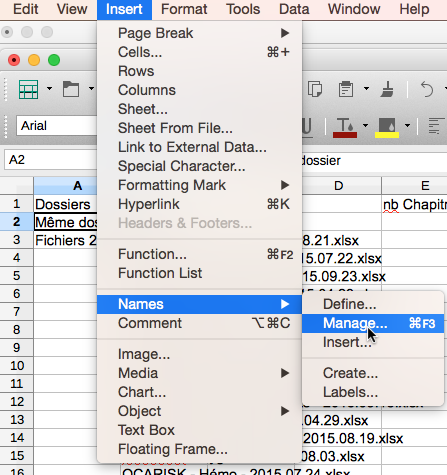 get cell column and row

range.clearContents(4) clears the cells with a String as value other clearing flags

Export as a CSV in UTF-8

Have a look here also.

Work on selections using the dispatcher

You can have a look at other actions such as Protection, Cancel, TerminateInplaceActivation, InsertContents (with properties ‘Flags’,’FormulaCommand’,’SkipEmptyCells’,’Transpose’,’AsLink’,’MoveMode’ )

Have a look at the equivalent in Visual Basic.

Let’s create and open a dialog with a push button and a label such as :

(example from this thread)

but clicking does not execute anything. Let’s close it, add listeners to increase the label counter when clicking the button, and re-open the dialog :

Working with a form

You might have created a listbox of name “Listbox”

and linked to data :

If the list box view is not in the current active sheet, you can access it with :

Please do not hesitate to do your contributions to my tutorial.